There are no openly gay male professional footballers in England – none of the 3,000. Professional football is not renowned as an environment conducive to being gay. Is it as simple as blaming the fans abusing from the stands and on social media, or is the problem more complex and hidden than we think?

Justin Fashanu took his own life in May 1998, eight years after he became the first openly gay professional footballer in England. The coroner reported that Fashanu was found hanged in a lock up garage and said the prejudices he had experienced had overwhelmed him.

Fashanu came out publicly through an exclusive in The Sun, who ran the headline as ‘£1m Football Star: I AM GAY.’

Fashanu revealed in the article that up to that point he had been “generally accepted by his fellow professionals” but also said they would often “joke about his sexual orientation.”

Fashanu dropped through the divisions as he was continually marginalised by teammates and managers. On announcing his homosexuality publicly, Fashanu became the victim of constant crowd abuse. His own brother, John Fashanu, admitted to offering Justin £75,000 not to reveal his sexual orientation and labelled his brother a “family outcast” – something he later regretted.

Since 1990, no male professional footballer has come out as gay while plying their trade in any of the top four divisions in English football.

Two per cent of men in England identify as being gay according to the Office for National Statistics (ONS) and if those numbers are transposed to football, there should be 60 gay professionals.

While that number is unlikely to be quite so high – homosexual men may opt out of a career in football before it starts for the same reasons that prevent gay professionals being open about their sexuality – there has to at least be a handful.

So why do they not come out? The most simple and conspicuous target for blame are the fans.

Fan abuse still happens in modern day football. Whether screaming it from the stands in the safety of a collective will to ignore, or hiding behind a computer screen – posting abuse online for everyone to see – safe in the knowledge that you will see no repercussions for doing so.

In 2010 the FA planned to shoot a video designed to discourage anti-gay chants on the terraces. They were reportedly unable find a player from the Premier League willing to endorse the video and production was cancelled.

Carl Nash has played for The Yorkshire Terriers – one of many inclusive, gay friendly football clubs across the country – for ten years. He believes that abuse comes with the territory of being a professional footballer.

He said: “If you look at professional clubs with 30 to 40 players on their books, by the law of averages there has got to be one or two gay players.

“I think the perception is that they will be abused from the stands and it will affect their career, but I wonder if the affect may actually be positive on the whole.

“Everyone gets abuse to some degree, whether it be racism, sexism or whatever.

“I think there would be more admiration [for a gay player coming out] than anything else. The problem is we don’t really know, because it’s been so long since we had one.”

Because of this, there has been no first hand account of what it would be likely to be an openly gay professional footballer in England in the last 30 years – so it’s hard to tell how supporters would react.

Surveys by Stonewall and BBC Radio 5 Live taken outside football league stadiums provide some clue as to the stigma still surrounding homosexuality in the football terraces.

72 per cent of fans have heard homophobic abuse in a football stadium, 8 per cent would not watch their team if there was an openly gay player in the side and a fifth of 18-25 year-olds would be embarrassed if their favourite player came out as gay.

The sad reality that these statistics illustrate is that if gay professionals are waiting for Homosexuality to be wholly accepted by the fans that frequent the stands of football stadiums, they’re going to be waiting a long, long time. Homophobia is an attitude, much like racism, that is fostered early and tends only to become more entrenched with age. Those 18-25 year olds could be watching their team from the terraces for the next 60 years.

And then there’s the dressing room.

The professional footballer’s dressing room is typically – perhaps archaically – an environment in which difference is deemed a weakness. It could be described as a toxic ‘jock’ culture – an environment of high testosterone and extreme competition. Not classically a place of tolerant views or the broad-mindedness necessary to welcome a homosexual footballer without a degree of prejudice from some quarters.

“You can get drunk and beat up your wife and that’s quite acceptable, but if someone were to say ‘I’m gay’, it’s considered awful. It’s ridiculous.”

Former Crystal Palace manager Alan Smith spoke of ‘the last taboo in football’. “I’ve had players over the years who were single and read books and so others [other players] said they must be gay…I think being openly gay would be something very difficult to live with in football…. You can get drunk and beat up your wife and that’s quite acceptable, but if someone were to say ‘I’m gay’, it’s considered awful. It’s ridiculous.”

Former Republic of Ireland international Tony Cascarino expressed what could be conceived as a gay player’s worst fears when making the decision as to whether to come out to his teammates.

Cascarino told The TImes: “Would a player mind if he found out a team-mate was gay? Probably. Players wouldn’t want to be left alone with him, they wouldn’t want to shower with him…. Dressing-rooms are like perverted nudist camps. Immature, wild places, little self-contained states where the normal rules of common decency and acceptable behaviour do not apply. Sexual activity and bodily functions are props players use for pranks and banter.”

“Would a player mind if he found out a team-mate was gay? Probably.”

Robbie Rogers – formally of Leeds United – came out as gay having moved to America to play for LA Galaxy. While he has intimated that the response to his openness has been “overwhelmingly positive”, providing hope that the changing attitudes towards homosexuality in society are being mirrored somewhat in his experiences in football, he was the victim of repeated use of the gay slur ‘queer’ from an opponent in a match two years ago.

In a statement on Facebook he said: “I quickly became enraged, I spent the drive home wishing I had channeled my inner Zidane and punched or head-butted this player even though I knew punching this person wouldn’t have helped either of us, my team, or the greater cause of advancing equality in sports. I went to bed upset last night. Angry at this player and and his ignorance. Angry at myself for not doing more in the moment. Sad the we still live in a time where this kind of intolerance still exists in my sport and elsewhere. And if I’m being honest, I was even a bit ashamed that a single word could make me feel, even just for a moment, all the awful feelings I felt for so many years: small, less than, wrong, and unworthy of love and respect by my family or god forbid by my teammates.”

In the professional football dressing room, although there is evidence of an increased acceptance of the LGBT community, homosexuality is still a taboo subject, unless you’re having a laugh.

So if attributing all the blame to the fans is too easy and to lay the rest at the dressing room door is also too simplistic, for what other reasons are professionals choosing not to come out?

Thomas Hitzselperger is an openly gay ex-Premier League footballer who came out after he retired. He claims the supporters were not to blame for his decision to keep his sexuality a secret.

“Football fans are much more enlightened and open-minded now. There will always be insults in everyday life, but players who contemplate coming out don’t have so much to worry about from fans. The fear is all in the mind.”

“The problem is that people have counsellors and consultants around them who advise against it [coming out] – and I’ve had the experience too,” Hitzelsperger told Sky Sports.

The issue is the fear of the unknown. This is unchartered ground. The clubs; the agents; the sponsors; no-one knows how people will react. So is it worth being the first to find out? Or do you bide your time, wait for someone else to step up and piggyback your way out of the closet door?

The Football League need a role model to pave the way for more professionals to be open about their sexuality. They need someone to test the waters before the floodgates open.

Nick Harkins of The Yorkshire Terriers confirmed this view: “I’m convinced there are homosexual footballers, not able to be completely open about their sexuality because of what they do – it’s a horrible situation.”

“It’s going to take someone really strong. Someone with a big profile. Can you imagine if Ronaldo or someone like that came out as gay? It would be huge for gay footballers, and the LGBT community as a whole.”

‘The Gay Footballer’ – the Twitter identity of a supposed Championship footballer – could have been that man. His account gained huge traction as he tweeted his journey through coming out to his family to setting a date to reveal his identity to the world. Gary Lineker among others tweeted their support as the account gained nearly 50,000 followers.

“I’m a professional footballer currently playing in The Championship. I thought I was strong enough. I’m not.”

The day before the date set to reveal his identity, the account tweeted: “I thought I was strong enough. I’m not.”

There was evidence of abuse on the account, along with the countless examples of support and goodwill. Gay slurs and cheap jokes along with equally concerning responses, which failed to grasp the gravity of what The Gay Footballer was doing and were devoid of all empathy: ‘Nobody cares’; ‘Get on with it’; ‘You’re just doing this for attention’.

Either this was a hoax and this was a keyboard warrior looking for likes and cheap social media thrills, or there is a Championship footballer who got close to coming out but couldn’t. In reality, it doesn’t really matter. Either way this is a sad indictment of the situation and has done nothing but damage the confidence of those gay professionals that do exist and were hoping for a role model they could follow into the unknown.

Nick Harkins of the Yorkshire Terriers said: “It’s a real shame either way. If he is a real person I just feel sorry for him – he’s got loads of support from the football world but at least as much abuse to go with it. I’m not sure social media helps with that sort of thing.” 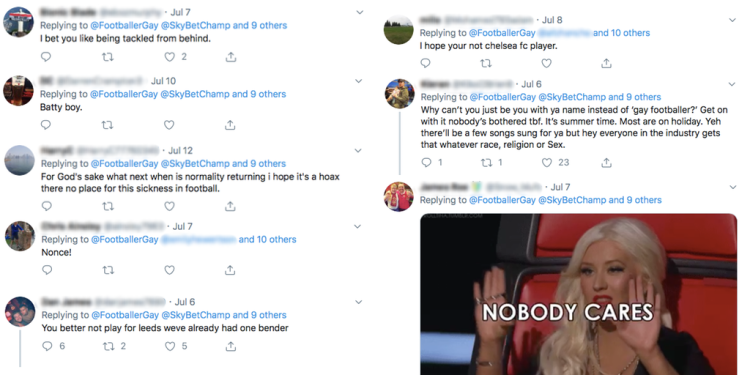 So the wait continues.

At the moment the man strong enough to deal with the hardships of being ‘the first’ doesn’t exist, or at least doesn’t think the juice is worth the squeeze – and can you blame them?

The true test of football – the fans, the clubs, the media, the agents, the sponsors, the fellow players – will come when a gay professional does come out publicly, which will happen.

As yet we do not know when or how, but it is the reaction to that first giant leap into the unknown that will either encourage or dissuade others to take their own steps towards open sexuality in a profession renowned for narrow-mindedness and sexual bigotry.

Published by Will Ford